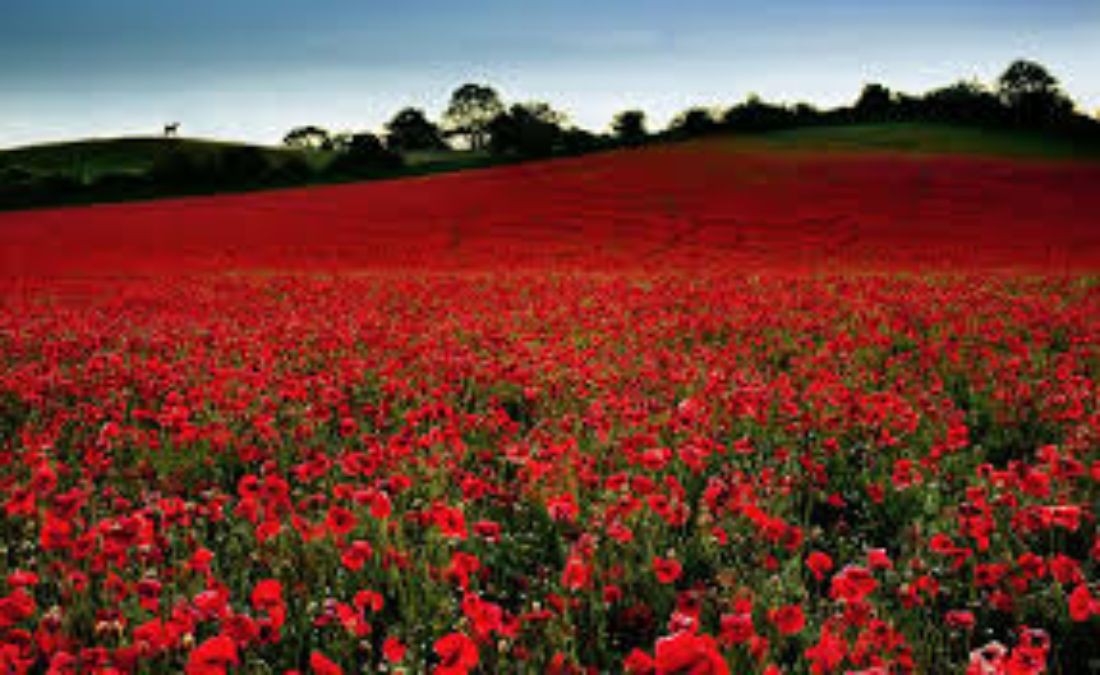 In a railway carriage that belonged to Marshal Ferdinand Foch, Supreme commander of the Allied forces, in the Forest of Compiegne in France the Armistice agreement was signed. The senior British representative was Sir Rosslyn Wemyss.

After millions of deaths, on all sides of this so called ‘war to end all wars’, it was signed at 11.00hrs, on the 11th day of the 11th month. It is a poignant moment, and it is right that this occasion should be so solemnly marked in so many parts of the world, not least in the United Kingdom, the Commonwealth, and right here where we are.

Hostilities may have ceased at that historic moment, but we know that it was not the war to end all wars. There may have been a naivete among those who claimed it, however the aspiration that there should be no more human carnage on this scale is entirely understandable. How can we make any sense out of the mass slaughter of European, African, antipodean lives on European soil, fighting European battles?

END_OF_DOCUMENT_TOKEN_TO_BE_REPLACED

‘I believe in one holy, catholic and apostolic church.’ We say this every week in the Creed, and the observant among you would have heard this very phrase being used in the Licensing ceremony of Fr. James just a couple of weeks ago, when the Archdeacon said, ‘The Church of England is part of the one, holy, catholic and apostolic Church, worshipping the one true God, Father, Son and Holy Spirit.  It professes the faith uniquely revealed in the Holy Scriptures and set forth in the catholic creeds, which faith the Church is called upon to proclaim afresh in each generation.’

Being an apostolic church has at least two implications for us. Firstly, the word means ‘sent’. The NT verb is apostello, but it will be better known to modern Greek speakers as the verb stelno, ‘I send’. God ‘sent’ his Son into the world as his Word made flesh. St. John’s gospel uses the verb frequently. So as God sent his Son, Jesus, so Jesus at the time when they received the anointing of God’s Holy Spirit, sent his ‘apostles’ to be Christ’s presence, Christ’s message, Christ as gospel, into the world.

END_OF_DOCUMENT_TOKEN_TO_BE_REPLACED

For the Lord your God is bringing you into a good land… a land of vines… of olive trees and honey… [where] you shall eat your fill.’

Just take a moment to look around you – at the sheer beauty, goodness, abundance of this place, this land which the Lord our God has given us, in which, for whatever reason, and for however long now, he has seen fit to have us live.

Ever since we arrived here as a family at the end of August, I have been reminded just how close to the terrain of the Holy Land we are here in Greece, how similar the landscape is in this land where east meets west. Those verses from Deuteronomy could’ve been written about this place as much as about the Promised Land. And, in one sense, of course, they are written about this land and about every piece of land – because as much as they are describing a specific geographical location to which the people of God were being led at that point in history, they are also describing in universal terms the type of relationship, the covenant God has made with his Creation as a whole.

END_OF_DOCUMENT_TOKEN_TO_BE_REPLACED

We gather today with a particular intention to ask for God’s healing.

The healing power of God is all at once complex to understand, multi-dimensional, wonderful, transformative and mysterious.

Healing is primarily a work of God the Holy Spirit – the Spirit that brooded over the waters at the moment of Creation; the Spirit that alighted on Jesus at his baptism, that empowered his ministry and teaching and that raised him from the dead; the Spirit that emboldened the disciples and apostles of the early Church; and the same Spirit that enlivens the Church today, that makes Christ real and enables us to call God Father.

The healing work of the Spirit is about straightening out and making right; it is about unfolding and loosening; about unlocking, unblocking and setting free; regenerating, reviving; soothing and embalming.

END_OF_DOCUMENT_TOKEN_TO_BE_REPLACED

I chose the first reading from the Acts of the Apostles for purely pragmatic reasons. It mentions Crete which connects the island to the journey of the great apostle St. Paul on his way to Rome which would his place of martyrdom.

The second reading tells of St. John’s version of what we would otherwise call Pentecost – it his powerful statement of the risen Jesus Christ outpouring the Holy Spirit on his disciples.

By the end of this sermon I hope to have joined up these two rather disparate readings.

If you were here for the liturgy on the Feast of Pentecost this last May, you would have heard a sermon from me about authentic witness. ‘If it looks like a duck, quacks like a duck, and walks like a duck, then it is a duck’. An authentic description.  I further added, just to complicate things, what sounded to be an octopus (χταποδι), but I was actually describing bag-pipes (γκαιδα). Try playing a Scottish reel on an octopus, or eating a little dish of marinated bagpipe!

END_OF_DOCUMENT_TOKEN_TO_BE_REPLACED

The words of so many of our harvest hymns are great. They express the beauty of God’s glory in creation, but also there is something very comforting about them.

The seasons come and go, not with relentless monotony, but each season with its own distinctiveness . καλο  φθινοπορο. The evenings begin to change, and even in Greece there is a crispness at times in the early mornings and late evenings.

For the beauty of the earth,  For the glory of the skies,

For the love which from our birth, Over and around us lies.

Yet despite the beauty that God reveals in his creation as his handiwork, there is much that distorts it, which is our handiwork.

END_OF_DOCUMENT_TOKEN_TO_BE_REPLACED

The vows are lovely – of course they are, and the vows when they were first married represent the legal commitment to each other. I rather like the words we all said together for they represent the spirit of marriage, and most importantly that marriage should bring joy and be life-giving.

END_OF_DOCUMENT_TOKEN_TO_BE_REPLACED

You could’ve heard the yelp in Piraeus.

There was I, wandering along to Bazaar with the two girls in tow to pick up some groceries; when, at the sound of the said yelp, I turned round to observe Rosa, our youngest, sticking out of a manhole in the pavement, one leg in, one leg out, her flip flop dangling precariously into the void below, eyes wide with the shock of it (understandably) and totally unable to extract herself from her predicament.  The cover of the manhole was missing; she had not ben looking where she was going as she toddled along behind me and had stepped straight into it, her momentum carrying the rest of her forward.   She escaped with only a grazed shin and it’s the sort of thing I’m sure we will laugh about in the future – do you remember the time Rosa disappeared into the pavement? – but I recount it this morning because of what happened afterwards, which I think speaks into our Bible readings this morning.

Nearby on the pavement that afternoon was a Greek family – Mum, Dad and a toddler safely in a pushchair. Seeing the incident unfold, the Dad leaped into action, helping to extract Rosa, delving into his bag for antiseptic wipes, stuffing some waste cardboard into the hole to prevent further mishaps and even going into the shop to remonstrate with the staff as to why they hadn’t reported the hole or done something about it themselves. (I must admit that made it slightly awkward when we then had to limp in there to get our shopping!)

END_OF_DOCUMENT_TOKEN_TO_BE_REPLACED

In my previous parish in England every year we had a big town centre celebration for the switching on of the town Christmas lights. In fact it always happened on the Saturday that was the day before Advent Sunday. I managed to get them to rename the event from Christmas Market to Advent Market – it made no difference to the fun that we all had, but it meant that Advent got a look in, and we held off the name of Christmas for a few more days.

It was the custom of the Town Council to bring in what they call a ‘big name’ to turn on the lights. What that usually meant was a minor celebrity who had no work except the pantomime at Swindon.

END_OF_DOCUMENT_TOKEN_TO_BE_REPLACED

On Friday afternoon I went with Fr. James to introduce him to the work of Apostoli . We were shown a video of their work. I already knew about many of the projects, but it was really impressive to note all the good works that the Archdiocese is doing throughout Greece as it seeks not only to support refugees and migrants, but also Greeks who have been affected by times of austerity, or whose needs cannot be filled by a government in chaos, strapped for cash.

We saw a facility for elderly people with alzheimers; a safe haven for children and young people with Downs Syndrome; projects to protect and nurture unaccompanied minors stranded in Greece because of the tragic situations in their own countries; tens of thousands of meals being produced every year to feed the hungry – and I noted how many of those who were thankful are Athenians. There are projects to ensure that medicines  and medical operations are made available for those who have no medical insurance.