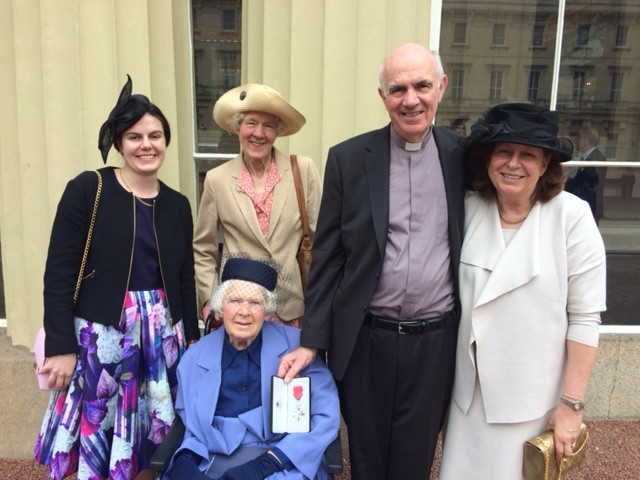 FATHER MALCOLM: “WHEN I RECEIVED THE MBE”

At 10:45am on Wednesday, 22nd June, together with my wife, daughter, sister and mother, all suitably attired in hats, I stood with other recipients among the crowds outside Buckingham Place awaiting the opening of the South entrance gate.

We were regaled with questions from tourists enquiring as to what was happening. Mobiles were to the fore and generous congratulations offered. Once through the gates and into the main entrance hall, the Palace staff took over. Recipients went one way, guests another and my mother in the wheel chair was taken off in a third direction accompanied by her own personal assistant. Eventually, we all met up in the grand ballroom. Meanwhile the recipients, eighty in all, were closeted in a substantial, richly decorated and much mirrored reception room. We were instructed as to what lay before us and how we were to respond. I was placed into the next-to-last cohort, which gave an opportunity to converse with others – a person who had long served with Save the Children Fund, a Royal Navy cook and a successful businessman from Yorkshire. What a fund of good stories must have existed among the eighty gathered! Then the moment came. Led down through the corridors decked with royal portraits, we approached the entrance door to the ballroom.  ‘Yes, sir, your turn. Please move to the centre,’ an official whispered. So I did, extending a nervous smile to my mother and family seated in prime position in the front row. A small bow to the Princess Royal and three steps forward. Immediately, her Royal Highness approached, attached the insignia to a clip previously placed on my jacket and immediately said, ‘So we meet again’. I was taken aback and slightly slow in recalling when we had met. She was referring to when she visited the religious centre for the athletes at the Olympic Games in Athens in 2004 – a centre I had some responsibility for. And then there was the occasion when she came to collect the Olympic Flame for the London Games in 2012.  She had requested prayers while laying a wreath at the war cemetery in Athens for the fallen of Allied Forces in WW II.  The conversation moved on to difficulties in Greece regarding austerity and the refugee crisis. A shake of the hand, three steps back, a bow and smartly off to the right. The attentiveness and alertness shown by Her Royal Highness to each recipient plus the occasional joke was exceptional. Marshaled to a seat at the back of the ballroom, I, with those who had preceded me, watched the last recipients being honoured. The National Anthem drew things to a close and the Princess Royal, with members of the Yeoman of the Guard, two Gurkhas, the Lord Chamberlain and other Palace officials took their leave. I eventually joined the family at the entrance hall of the Palace. It was one of those proud family moments. We then had to decide fast as to what to do next. A huge threatening cloud had gathered over the Palace. Do we join lengthy queues for an official photograph? Do we make a dash to where we had decided to have a light meal and celebration drink, or do we skedaddle to Victoria Railway Station before the cloud breaks? Wheel chairs and rain do not mix. So we played for caution. After a few photos taken on our mobiles in the Palace courtyard, we moved swiftly to the station. There, in our finery, we had a celebratory round of coffee and sandwiches and remained dry, before Mother was wheeled on to a train to begin her homeward journey. A memorable few hours.