Working together – a report by Jean Mertzanakis

Jean Mertzanakis, honorary secretary of the Anglican Chaplaincy in Athens, reports on the message of thanks addressed to the Anglican community by the representative of the Greek Orthodox Church, Vassileios Meïchanestídis.

On Sunday 13th March, the Annual General Meeting of the Anglican Chaplaincy in Athens was addressed by Mr Vassileios Meïchanestídis, a representative of Apostolí, the charitable outreach programme of the Greek Orthodox Church. Apostolí was founded in 2010 by His Holiness Archbishop Ieronymos to embody the presence of the Church within the community by reaching out to those in need. One of its first successes was the Church in the Street Food Programme for the needy, providing a simple, hot and nourishing daily meal. Although originally for immigrants (mainly from Asia and Africa), as the Greek economic crisis deepened an increasing number of Greeks began to join the daily queues for food. 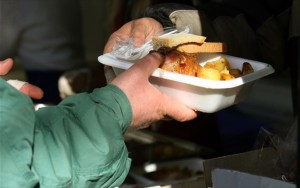 Nowadays, the work of Apostolí falls into two categories – helping Greek individuals and families who are suffering because of the economic crisis, and working with the floods of refugees and migrants currently pouring into the country. The statistics he quoted were staggering! He referred to 78 hot-meal distribution centres serving 10,000 meals per day in Athens; 8,500 food parcels distributed each month again; the creation of eight community grocery stores supporting over 4,000 families and eight medical centres and two pharmacies in the prefecture of Attica; payment of fuel costs at 35 different types of institution; 24 co-operative stores; support for those in prison; the creation of an Alzheimer’s centre and a centre for those with psychological problems, many of which are caused by the steady degradation of living standards over the last few years. Much of what is described above is done in Athens alone. Help is also received from abroad, with a donation of 60 million dollars from the USA being used for the purchase of medical supplies. On a more long-term basis, support and agricultural training is given to Greek families, often with young children, who are leaving the city and returning to their village to live with their parents – a logical solution in times of need. And at the Estía hostel, unaccompanied and under-age young immigrants are given shelter, language lessons and an introduction to Greek society and culture as a basis for their continued stay in Greece.

The government, too, is acknowledging the role played by the Greek Orthodox Church in the migrant crisis by delegating to them the responsibility for a “hot spot” (care and processing centre) on the island of Samos, as well as for other aid programmes.  Already, on Samos and Chios, the Greek Orthodox Church supplies thousands of meals daily and buildings have been renovated to house those who make the treacherous sea crossing from Turkey. There are currently about 50,000 refugees and immigrants in Greece and this number is forecast to rise to between 150,000 and 200,000 in the coming months. However, the creation of organised programmes for their onward journey -or for repatriation- is due to start and, with the help of God and thousands of willing helpers, the situation will improve.

Hoping for a better future: migrants arriving at the port of Piraeus (c) 2014 Paul Jeffrey

Vassileios thanked the Chaplaincy and the British Embassy in Athens, as well as the Anglican Church in Europe and Britain, for their continuing support. He added that the Anglican Church is the only one working hand-in-hand with the Greek Orthodox Church. This is due entirely to the ecumenical approach of our own Father Malcolm, who has steadfastly promoted interfaith understanding and now has a monthly meeting with “Churches Together in Athens for Refugees” at various venues in Athens.

Editor’s note: According to the UNHCR, between the 1st January and 15th March a total of 143,634 arrivals by sea of refugees and migrants has been registered in Greece alone, compared to 9,495 in Italy. As the weather improves, these numbers are expected to increase exponentially.