Report of the Anglican Church in Athens to the Archdeaconry Synod

Our Archdeacon, Colin Williams, has asked all members of the Archdeaconry Synod, to write a report on the activities of the Chaplaincy over the past year.

Here is our report – and what a busy year it has been! We hope you enjoy reading it and that it will encourage you to come and join us for a service, or one of our bazaars or a concert.

Report from the Anglican Church in Greece

(St. Andrew’s Corfu and St. Thomas’s Crete will present their own reports as they have Synod Members)

Note:  The  legalization of the Church in Greece was completed towards the time of Synod 2017. The new procedures required of us have been put to the test with the appointment of a new Assistant Chaplain to Crete, further complicated by the fact that he is from outside the EU. The Board of the Anglican Church in Greece is due to meet later in the Autumn for its required annual meeting.

The order in which the following are placed has no bearing on their relative importance!

A very welcome addition is a monthly Choral Evensong. The music for this is directed by Jasonas Marmoras, a graduate of the Athens Conservatoire who now teaches between Greece and Basel in Switzerland. He is passionate about the Anglican musical tradition of the Tudor period. The choir he has gathered around him are all Conservatoire students, and all Greek.  The congregation for this evening service (Esperinos to the Greeks)  often rises to around 130 and 98% of the congregation is young adult Greek. There is a short homily at this service that seeks to link the areas in common between the Anglican tradition and Orthodoxy.

The Harvest Thanksgiving  service was held at a vineyard just outside Athens, followed by a free wine tasting, then an excellent buffet meal in a large marquee, followed by entertainment and dancing

December was busy with special worship – St. Nicholas, with the dressing of a boy bishop, a Sing-a-Long Messiah, Sing-a-long carols and songs with mulled wine and stolen being handed round while we sang, and a traditional Lessons and Carols. The latter two had standing room only in St. Pauls. The Orthodox Church does not have a tradition of carols, so the Greeks love to come and sing them in the Anglican church.

3.  ‘All Age’ Eucharist. A rather pedestrian title, but put simply Sunday worship which is still Eucharistic but slightly shorter and snappier than a normal Sunday. At this we try to engage the children and young people a bit more and to help us Fr. Leonard sometimes produces a rather multi coloured and flamboyant parrot. An idea he came up with some years ago in Cirencester, in searching for a name, he came up with Pontius Parrot – almost mentioned in scripture and creed. 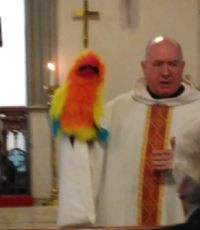 Pontius is known to come out with some reasonably funny lines. For example on Mothering Sunday he spoke a bit about his own mother – she was quite a chick in her young days, and a wise old bird as she got older. While still in his egg Pontius had a stamp collection. How was this possible? Well, he had a stamp albumen

4.  Work of the Church Council. Over this last year the Council has agreed that each year we should try to have three main items to develop, Building, Mission, Finance (they are of course all connected). Over this last year there has been a major project to restore the pathway that run rounds the outside of the church in the church garden, and round one side this pathway has been widened to allow access to a newly built shed (referred to by the builders as a spitaki, or little house) and in October this will be fitted out as a toilet with wheelchair access. It will also have baby changing facilities. This is a major step forward in our attempts to be inclusive of people challenged by disability, and those who bring very young children to church. It affords that an appropriate dignity.

4.  Work with children. Lynne Doolan has been Safeguarded (Level 2) and is now responsible for developing our children’s work. Sunday by Sunday the number of children is unpredictable and variable, but having a new designated and experienced leader has transformed the enthusiasm of the young ones and their parents. In fact we are about to have some new families with children joining us, so this coming year will be an exciting time, and Pontius Parrot will be very pleased.

5.Ecumenical Partnership. The Senior Chaplain is Apokrisiarios of the Archbishop of Canterbury to the Archbishop of Athens and All Greece, so there is a formal relationship between the two churches. The Chaplain attends certain ceremonies in the Orthodox cathedral. Just before the turn of the year he attended the ‘Vasilokopitta’ or the cutting of the Basil Cake at the Archbishop’s Residence along with a couple of hundred other people. On January 1st (St. Basil’s Day) the Chaplain attends the Presidential Palace, along with senior military, civil, judicial and hierarchical figures, to shake hands with the President of the Hellenic Republic. St. Paul’s enjoys a close and warm friendship with the Swedish Lutheran Church in Athens. They have an evening Swedish Mass twice on two Sundays a month. It was a great delight to all of us that during the year the Swedish Pastor, Fr. Bjorn Kling, was given a Permission to Officiate (under the Porvoo arrangements) and he has been able to conduct two Anglican services since receiving his PTO. The Anglican congregation make use of the Swedish Centre close by for small social events.

The Christmas Bazaar is the oldest in Athens and has been running since the 1960’s. It is a huge event and creates a considerable income (though this has been affected quite a bit by Greek austerity measures). This event is held in an impressively large events hall and draws thousands of people to it.  The other smaller, but no less significant event is the Spring Fayre which is held around the  church garden. Both events bring social benefits as well as financial.

St Paul’s has made a name for itself as a concert venue. Many Athenians know of us because of concerts they have attended. This is good mission for us as we are able to show the hospitality, welcome and inclusion of the Anglican Church. Orthodox churches will not allow concerts to take place, so we are uniquely placed to merge church and a wider Athenian culture and the arts. The range of concerts is impressive from classical through to a very regular ‘Radio Pepper’ radio broadcast, which has a young audience. Of course we benefit financially from these concerts, but the key outcome is missional, and we have a Concert Organiser and a Concert Supervisor who ensure a good experience by all who attend. 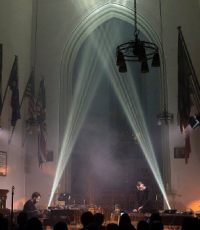 9.  Commitment to the wider community. Paul’s continues to work closely with other organizations as they respond to the needs of Greek citizens suffering from the effects of the economic crisis, and the refugee and migrant experience. Deacon Christine Saccali is the Refugee and Migrant Response Facilitator, funded partly by the Church Council and partly by USPG. We have an eye always on how that work helps refugees to integrate into Greek society. In this our key partners are Apostoli (of the Archdiocese), The Salvation Army and USPG. There are regular meetings ‘on site’ with the organizations that we support, but some of the key work is be

ing able to put organizations in touch with each other. Our funding capacity is small, but as a ‘hub’ and a trusted partner we have an influence well above our weight. We engage with projects that involve work with unaccompanied minors, traumatized minors, sexual exploitation, legal advocacy, and the Church in the Street programme which still feeds 800 people each day in central Athens; Many Greeks now have to use this feeding programme as austerity, cuts to pensions, and high taxation have driven many into poverty.

10.  Royal Visit. In May there was a very significant visit of HRH the Prince of Wales, and HRH the Duchess of Cornwall visited Greece (Athens and Crete). This was a very high profile visit and had a lot of media coverage as it was something of a ‘first’ for Greece in terms of an official royal visit from the UK. Deacon Christine conducted a short service at the Commonwealth Wargraves Cemetery at Alimos (the Senior Chaplain was away from Athens), and it gave an opportunity of the Ambassador’s Residence to meet some of the key people with whom the Anglican Church in Greece co-operate at a social and community level. Prince Charles had an audience with HB the Archbishop of Athens and All Greece, and pledged continued support for Greece through strong personal links, and the Prince of Wales Trust.

11.  Diplomatic Support – the Senior Chaplain and Deacon Christine support the British Embassy in a number of ways through the year, and other English speaking embassies. There are military commemorations at which Christian worship has to be provided; ANZAC Day, Remembrance Sunday (at which 20 Ambassadors of Consul Generals were present), and so forth. We were able to help the Consulate recently with UK citizens caught up in the fires in Attica. The Irish Ambassador brought the mother of the Irish man on his honeymoon, who was killed in the fire, to St. Paul’s for a time of quiet counsel, prayer and the lighting of a candle.

12.  New staff members. A new Assistant chaplain has been appointed to Crete. His appointment has been complicated because he is not an EU citizen (Canadian). We hope that Canon Bruce Bryant-Scott (whose wife if Frances) will be licensed in Crete by Archdeacon Colin on Friday 12th The Revd. James Harris has been appointed as a ‘self supporting’ Assistant Chaplain for Athens, for the period of one year. Fr. James has felt called, with his wife and children, to take a year out of UK ministry to work in Athens. He will be a welcome support on the ministry team in this very busy and complex chaplaincy. We hope the Licensing will be in September or October.