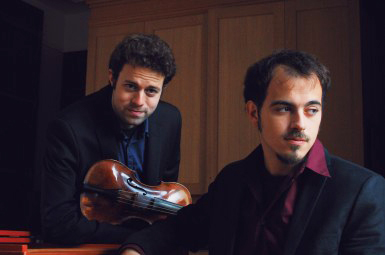 A RECITAL titled “The Annunciation” by the early music ensemble DissensoDuo is being held in St. Paul’s Anglican Church, Philellinon 27 and Amalias Avenue, on Monday 21st December at 8pm. Organised by specs ‘n’ arts, the entrance fee is € 10 (students € 8). Tickets are also available online, via www.ticketservices.gr.

Musicians Yiorgos Samoïlis (baroque violin) and Alexandros Mastichiadis (harpsichord – organ) will be playing a repertoire of early baroque music comprising works by Dario Castello, Heinrich Biber, Pandolfi Mealli and Giovanni Leoni. These 17th and 18th century works belong to the so-called Stylus Phantasticus, where improvisation is a prominent element. At the same time, the duet pays particular attention to the historically-documented interpretation of these works, making for a particularly sensitive rendition of this musical genre, where classicism and improvisation go hand-in hand.

The two Greek musicians met in 2013 during their studies in the Conservatory of Utrecht in the Netherlands. Their contrasting personalities together with their shared interest in early Italian baroque music led to a unique chemistry when performing onstage. DissensoDuo’s most recent public performance was at the renowned Utrecht Early Music Festival in September 2015.