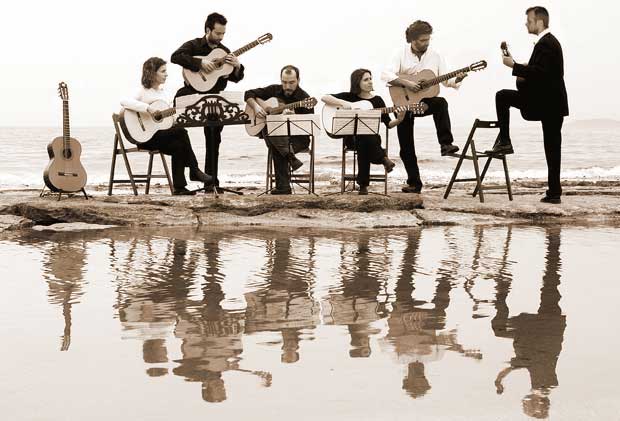 For the second consecutive year, the Guitarte Ensemble will fill St. Paul’s with the sound of guitar music in an early music repertoire conceived to celebrate the Christmas spirit. Centred around works by English Renaissance composer John Dowland (1563-1626) adapted to the guitar by Panayiotis Adam and Gilbert Biberian, the concert also includes Italian Renaissance dances and Concerti grossi by A.Vivaldi and G.F.Handel arranged by Paul Gerrits and Nikos Hatzieleftheriou.

Composed by guitarists Nikos Hatzieleftheriou, Christos Faklaris, Frangoulis Karayiannopoulos, Maria Papamichael and Anna Sartzidou (who also sings), with the participation of Christina Polykreti and Nektarios Sakellariou, the Guitarte Ensemble will perform pieces for 2, 3, 4, 5 and… 7 guitars! True to the ensemble’s philosophy of modulating the orchestrational dynamics of performances while simultaneously respecting the way the guitar is played as a solo instrument, the concert proposes a unique approach to Renaissance and Baroque music.