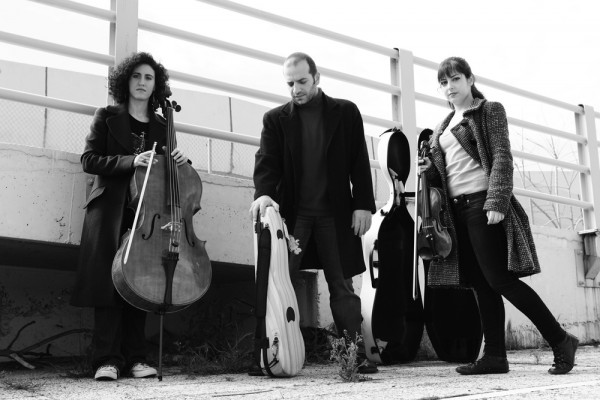 “Secret Dancing”: the Galan Trio in concert at St. Paul’s

The Galan Trio is in concert at St. Paul’s Anglican Church, Philellinon 27 & Amalias Avenue (metro: Syntagma), on Friday 15th April, at 8:30pm, with a varied programme titled “Secret Dancing”. Organised by specs ‘n’ arts in the context of the Musical Moments at St. Paul’s 2016 season, the entrance fee is €12 (students €8). Tickets are also available online via www.ticketservices.gr, or can be booked by calling 210.723.45.67.

Composed of Dimitra Triantafyllou (violin), Marina Kolovou (cello) and Petros Bouras (piano), the Galan Trio  was formed by the three soloists in 2012 out of the shared desire to approach important classical music works from a different angle and, through a contemporary interpretation, to express the “soul” of each piece while daring to combine it with different forms of art, such as dance, video art and artistic lighting, thus giving the score a fresh, energetic air.

The Galan Trio chose to premiere “Secret Dancing”, a piece composed specifically for it by Harold Weiss at their concert at St. Paul’s, adding yet another reason for music lovers to attend it. The programme also includes Clara Schumann’s “Piano Trio in G minor” (op.17), Αntonin Dvorak’s “Slavonic Dances” (Opus 46, No. 2 in E minor and No. 7 in in C minor; arr. G. Borch), Mikis Theodorakis’ “Trio for violin, cello and piano”, and Giacomo Puccini’s “Madama Butterfly” (arr. G. Avolio).

Wondering about the meaning of the Greek Trio’s name? Although it deceptively seems to refer to the Greek word γαλανός (galanós or sky-blue), it derives in fact from the proto-Germanic verb galaną (/ˈɣɑ.lɑ.nɑ̃/), meaning to sing, enchant/ to cry, call, scream/ to cast spells, practice sorcery, sing charms/ to roop, i.e. to roar, make a great noise. The English noun deriving from it is “gale” – and Galan Trio promise to fill St. Paul’s with a sweeping gale of music in motion.