On Sunday 13th November, Fr Malcolm led the congregation in a Service of Remembrance to honour all those who died in the Two World Wars and in subsequent conflicts around the world. Official guests included Their Excellences the Ambassadors for Great Britain, Ireland, Canada and Slovakia, theConsul General for New Zealand, and the British, French and Canadian Defence Attaches.The Rev Rabbi Gabriel Negrin of the Beth Shalom Synagogue was also in attendance.

The Service of Remembrance was especially sombre for it marked the centenaryof the Battle of the Somme. As Fr Malcolm opened the service he reminded us that it is regarded as being one of the bloodiest battles within human history. British and French forces joined by military personnel from their empires were ranged against those of Germany. On all sides there were a million casualties, killed or wounded. No more than 10 kilometres was won.

A wreath of poppies was brought through the church and laid on the Holy Table.

During the service Captain Richard Blackwell, the Military Attaché at the British Embassy,read the first reading from St Matthew, which was interspersed with extracts from “Exposure” by Lt. Wilfred Owen M.C. 2nd Battalion, Manchester Regiment. H.E. The British Ambassador read the second reading from St Paul’s letter to the Romans.

In addition, An extract from “A letter from the Somme” written by Lt Wilfred Owen to his mother, and “A Cry for Peace”, “Words from a Trench” by Second Lt Jocelyn Buxton, 6th Battalion, The Rifle Brigade, killed in action on the first day of the Battle of the Somme aged just 20, were read out.

Wilfred Owen’s letter vividly described the hell and horror of the battle of the Somme, the trenches, the shelling and witnessing his sentries being blown to nothing, whilst Jocelyn Buxton’s “A Cry for Peace” struck a chord amongst those listening as being as relevant today as it was 100 years ago. He recalls seeing lovely wooded valleys and pretty villages behind him – “A vision of beauty and peace amongst the fitful crashing and panting of guns, which would remain for long a veiled vision to us because it was all so insecure while the passions and ambitions of men continued to find vent in mutual slaughter”

Fr Malcolm gave an excellent sermon. He recalled not only the horrors of the Battle of the Somme, but reminded us that presently we are in the outer rings of a war zone as evidenced by the presence of the refugees in our midst. He invited all to participate in God’s big story of reconciliation.

The singing during the service was beautifully led by the choir of St Paul’s. The Athens Singers provided further embellishment by delivering the Sanctus and Agnus Dei from Bob Chilcott’s Little Jazz Mass.

After the service Fr Malcolm and the Ambassadors joined representatives of various nations to share in the Act of Remembrance in the Cemetery of the Commonwealth War Graves Commission on Leof. Poseidonos, Alimos. 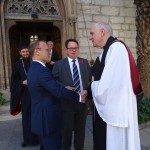 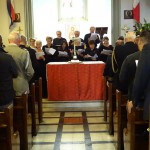 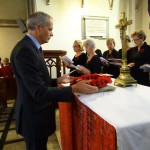 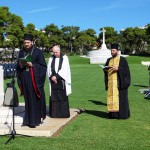 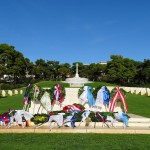 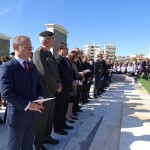 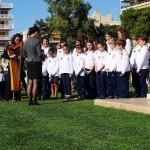