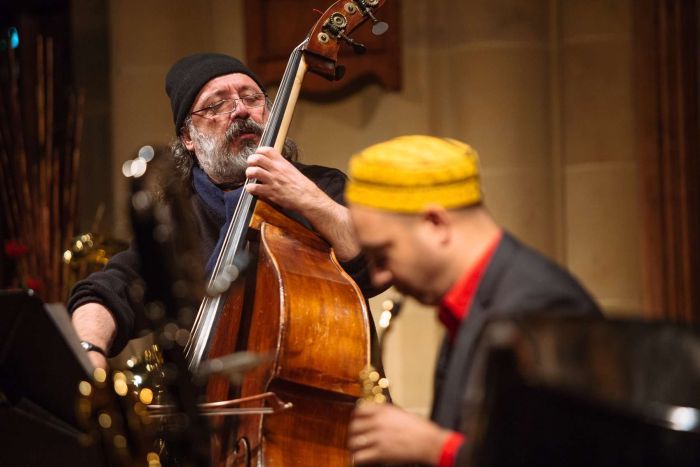 “Immersion”, a concert by the Nick Tsiavos Ensemble

“Immersion”, a concert by the Nick Tsiavos Ensemble is being held on Monday 11th July, at 9pm, at St. Paul’s Anglican Church, Philellinon 27 & Amalias Avenue (metro: Syntagma). Organised by specs ‘n’ arts, tickets at the door are €12 (students €10); they can also be purchased via www.ticketservices.gr, or booked by calling 210.723.45.67.

“Immersion” is the latest work by Greek-Australian double bassist and composer, Nick Tsiavos, a musical adventure-cum-exploration conceived to last through the night of the Southern hemisphere’s winter solstice. The initial 14½ hour performance in 2015 was a celebration of “anarchy, energy, and the line between the dark and the weird” calling the audience to cross the threshold between the longest night of the year and the beginning of the return to light.

Combining the texturally-rich Orthodox chant of Tsiavos’ childhood with elements of jazz, post-rock and new music and constant improvisation, the 90-minute soundscape -or maybe the flowing musical sculpture- at St. Paul’s promises to excite, enthrall and capture the audience. Accompanying Nick Tsiavos on the double bass are four exceptional musicians, some of whom have worked with him for 30 years or more: Deborah Kayser (soprano), Adam Simmons (saxophones/clarinets), Anthony Schulz (accordion) and Peter Neville (percussion).

Renowned for his performances that open new sound worlds, Tsiavos explains his work as motivated by “the idea that art can be transformative. This experience is not just something that you consume and walk away from, but something that actually stays with you and changes you”. In other words, his music embraces the metaphysical by speaking directly to the soul – a Musical Moment at St. Paul’s nobody should miss…

The concert will be flanked by a presentation of “Pearl Harbor”, a painting by Vassilis Garyfallakis first presented in 2014 at the Argo Gallery in Athens as part of his solo exhibition “Θαλασσοπαιδίες – Thalassopédies”, based on an idea by Alexandros Papaïoannou and his EyEaЯt Photography.

This project has been assisted by the Australian Government through its arts funding and advisory body, the Australia Council for the Arts.