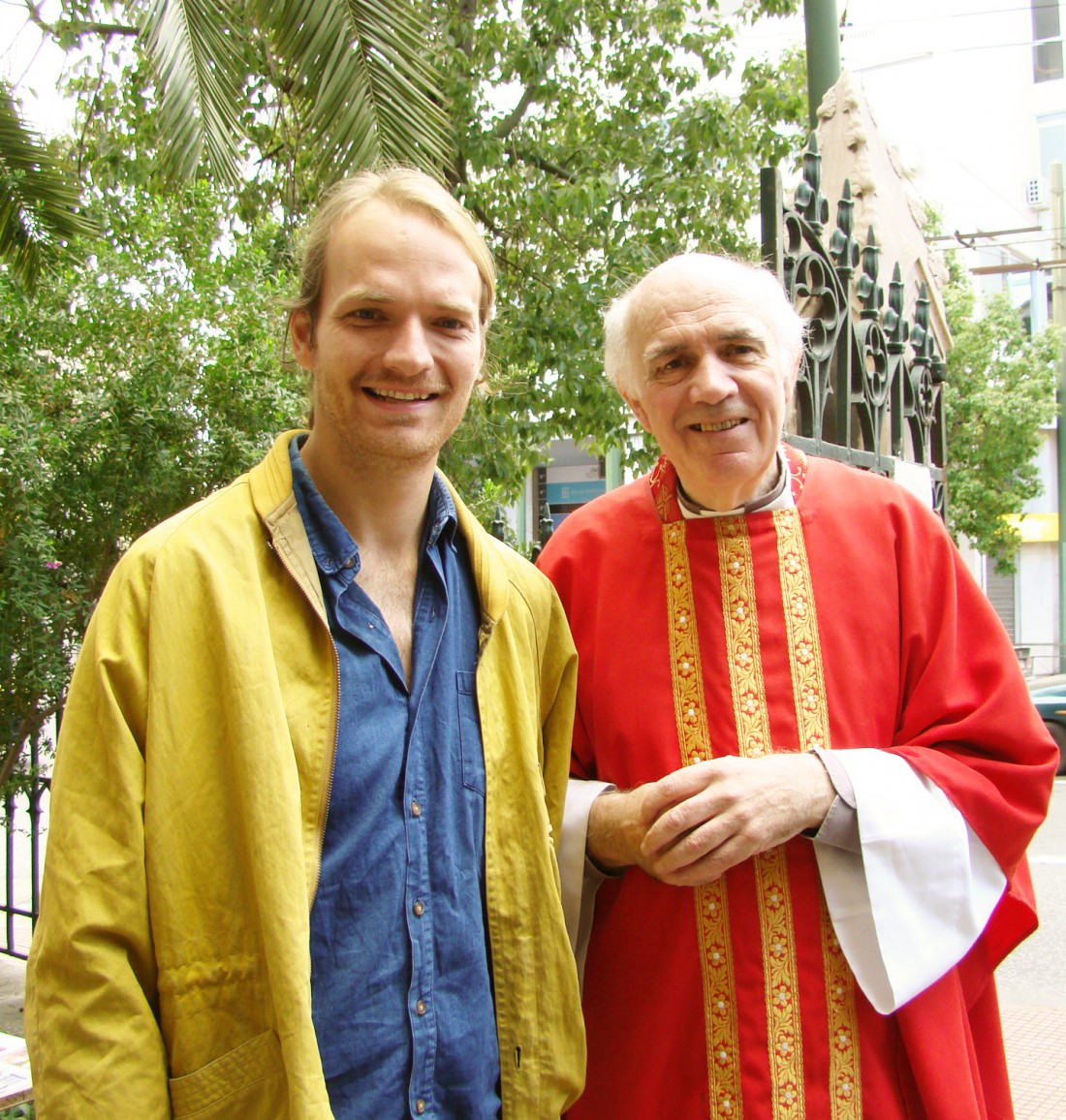 Many of you will remember Mr Max McClelllan (seen here on the left of the photo) seconded by Us (formerly USPG) to assist Fr Malcolm Bradshaw here in Athens last November, in efforts to address the needs of the refugees in Greece.

Between 18-21 May at St-Jacut-de-la-Mer, in Brittany, Max was one of the keynote speakers at the Synod of the Archdeaconry of France, whose theme this year was on “Migrants and Refugees”. To read the full article, please click here: http://eurobishop.blogspot.gr/2016/05/french-synod-focuses-on-migrants-and.html. Some essential points of the talk are given below.

During the height of the refugee crises hundreds and thousands of migrants and refugees were transiting through Greece having crossed the Aegean in flimsy inflatable boats, journeying onwards through the Balkans to countries such as Germany and Sweden.  With the EU-Turkey deal, the Balkan route has been closed in an attempt to halt the flow of refugees from Turkey via this route. This has meant that there are now about 53,000 refugees stuck in Greece, with the EU promises of processing their claims and relocation largely ineffective. (Only 615 out of the promised figure of 60,000 refugees have been relocated in the past six months). Many of these refugees are now in open or closed camps in difficult conditions.

As a result of Max’s address, further donations have come to the Chaplaincy to assist work among the refugees.

The Anglican Church in Athens is providing up to five hundred hot meals once a week to two of the closed camps in Athens. In addition, the Chaplaincy continues to be the recipient of financial donations, which support the work of five programmes run by various NGO’s. Due to an appeal made in its service sheet, last week ‘Samaritan’s Purse’, a substantial Christian NGO from the United States, informed the chaplaincy that it had 1,000 male hygiene kits available. These are desperately needed for the internees at Petrou Ralli and Amygdaleza. Using the donations sent to the Chaplaincy, 1,000 tubes of toothpaste were also purchased to complete the kits, which will be passed on to where they are needed at the time.

During the month of June we will be collecting the following items for distribution:
– Face Flannels
– Towels – hand towels or of a larger size
– Combs.
If these could be with the Chaplaincy by the 26th June that would be helpful. Don’t forget you can invite friends, acquaintances, members of your place of work to help in making this collection.

The numbers of refugees and migrants in Europe, although large, are but a drop in the ocean compared to the numbers of refugees and displaced persons in the Middle East as a whole, the majority of whom are in the Middle East, Africa and Asia, not in Europe. A total of 12.5 million Syrians have been displaced from their homes, but 2/3 of them are still in Syria.

“When an alien resides with you in your land, you must not oppress him, he is to be treated as a native born among you. Love him as yourself, because you were aliens in Egypt. I am the Lord your God.” (Leviticus 19: 33-34).

NB: A first report by Max McClelan on the refugee crisis in Greece was posted by the Anglican Communion News Service on its website in early March 2016. To read it, please click here. You can also read the story of Navid contributed by Max McClelan here.