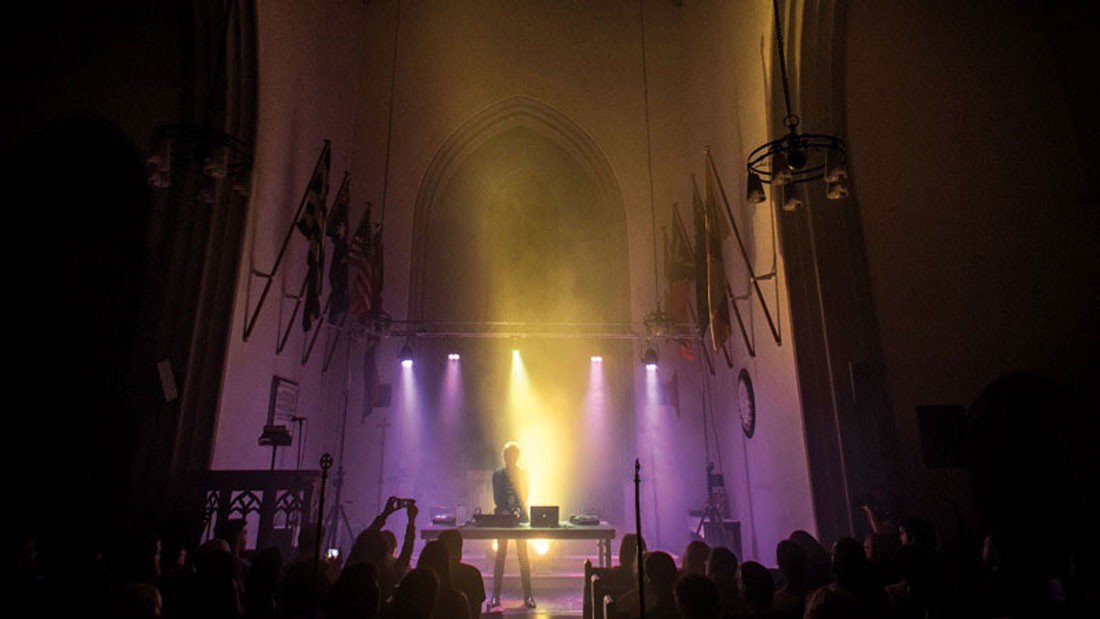 For some years now the Anglican church of St. Paul’s has been one of the most interesting concert venues, mainly for classical music. The last two years electronic or pop mood music has also been held there, making it one of the main attractions for the fans of contemporary music.

It might not draw the attention as one passes outside, on the corner of Filellinon and Amalias street, but the inside of St. Paul’s is certainly compelling with the light refracted through the impressive stained glass windows and the music which can be played on the oldest church organ in our country. This is the reason why for many years concerts for classical music have been traditionally held in this historical church in the centre of Athens and also at specific times of the year, like the spring cycles of organ concerts.

From ritual to sessions…

What is impressive however is that the last years there has been an opening to contemporary music. A tradition which in other countries might be something accepted, but over here is something new. Just the previous year the cycle of St. Paul’s sessions opened whilst the radio station Pepper 96.6 started to hold their pop concerts there (exclusively for their public). The St. Paul’s sessions are of particular interest as they move in a large spectrum of contemporary musical expression which covers levels of electronica and experimental scenes, includes aesthetic directions of ambient and modern classical tendencies and most important, presents artists who attract with their wider artistic presence the interest of a specific public, to the extent that very often the concerts are sold out early on.

In their second season St. Paul’s sessions have already made a strong start with the greatly successful concerts of Lubomyr Melnyk, Jin and Laurel Halo, from virtuoso piano to challenging electrobeats and great atmosphere. The new year opened with the extraordinary Coti K. and his project The Man from Managra. Continuing, we have once more the popular American musician/ song writer Peter Broderick (4/2) with the music from his excellent record All together again. On 10/2 the mysterious Prurient will celebrate his twentieth anniversary on the electronic scene. The intriguing duet of the German Grandbrothers (2/3) manipulates electronically the natural sound of the piano and base their music creatively on this, using minimalist techniques and trance/ambience practices. The result is ‘Open’ as the title of their last album.

The program for St. Paul’s sessions for this year concludes with three more important occasions. The Mexican composer and producer Murcof (19/3) is considered an extraordinary even emblematic persona in contemporary electronica. Italian pianist and composer Federico Albanese (20/4) has his own particular sound and piano approach, something between classic and jazz, but so authentic European bluesy and moody. The last presence in this year’s events is the duet of Porter Ricks (12/5) pioneers of the classic German dub techno scene of the 90’s.

A new musical cycle which has already started at the Anglican church of St Paul’s is the Cadena Project. This is a series of concerts which aims through their own mixed design to bring closer classical with instrumental Greek music, rock with jazz, poetry with opera, retro with chamber music etc. in a chain (cadena) ten artists present their work on Wednesdays- the concerts have already started on 17/1 with the projects Catharsis and Athenian love prelude and will continue until March.

Further on the program we will meet the Great movie soundtracks (31/1) Gaia by guitarist George Tambakis and celloist Stavros Parginos (by exception Friday 23/2) and more, which will travel us through romantic paths and six chord Greek approaches to the Bedroom Art Sessions by Andriana Babali and Quarderinas Quartet (21/3) up to Easter and its hymns. Perfect for a church.

This (translated) article appeared recently on the “Athinorama” website regarding the very popular concerts at St Paul’s.  To read the article in Greek click here.

For all concert information regarding dates and performers please check out the Calendar section in this website.