To all our friends at St Paul’s and beyond

The time has come for Olga and myself not to say a final ‘goodbye’ but rather a heartfelt ‘au revoir’. It has been a long and at times demanding sojourn in Athens. There have been moments of frustration and anxiety but these have been over ridden by so much that was sheer delight and joy. If asked as to whether or not we would do it all over again then we would firmly say, ‘Yes’. END_OF_DOCUMENT_TOKEN_TO_BE_REPLACED

I have not been in the Peloponnese since 1978. I sailed by ferry from  Italy to Patras, and then on to Athens for three weeks study at the British School (of Archaology and Topography). From the School we visited Mycenae, Epidavros, Olympia and Korinth. So after such a long time it is good to be back.

There is a legend, of course, about a monk called St. Regulus, who visited Patras and took possession of some of the bones of St. Andrew and transported them to the east coast of Scotland, giving the name to the town and later the University of St. Andrews. This year the university celebrates its 600th anniversary, and it was my first university. So some little connections!

END_OF_DOCUMENT_TOKEN_TO_BE_REPLACED

Many years ago I was a Team Rector in North East Suffolk. Lynne and I lived in a small market town called Halesworth  near to Southwold famous for its Adnams beer, and Adnams is a very good wine supplier as well. I recommend the Adnams ‘Fizz’ which friends from Suffolk used to bring us as a present when we were in Crawley and Cirencester.

Halesworth Team Ministry had its own very well produced church magazine called Team Times. The quality of its production was really only possible because we had a truly wonderful woman called Margaret Deering who sold advertising space to local businesses. END_OF_DOCUMENT_TOKEN_TO_BE_REPLACED

The Harvest Festival celebration takes places on Sunday 18th October at the Kokotos Estate, Semeli Str., Stamata, Attica 145 75. We warmly invite you to join us in celebrating this year’s harvest in the winery’s beautiful surroundings. END_OF_DOCUMENT_TOKEN_TO_BE_REPLACED 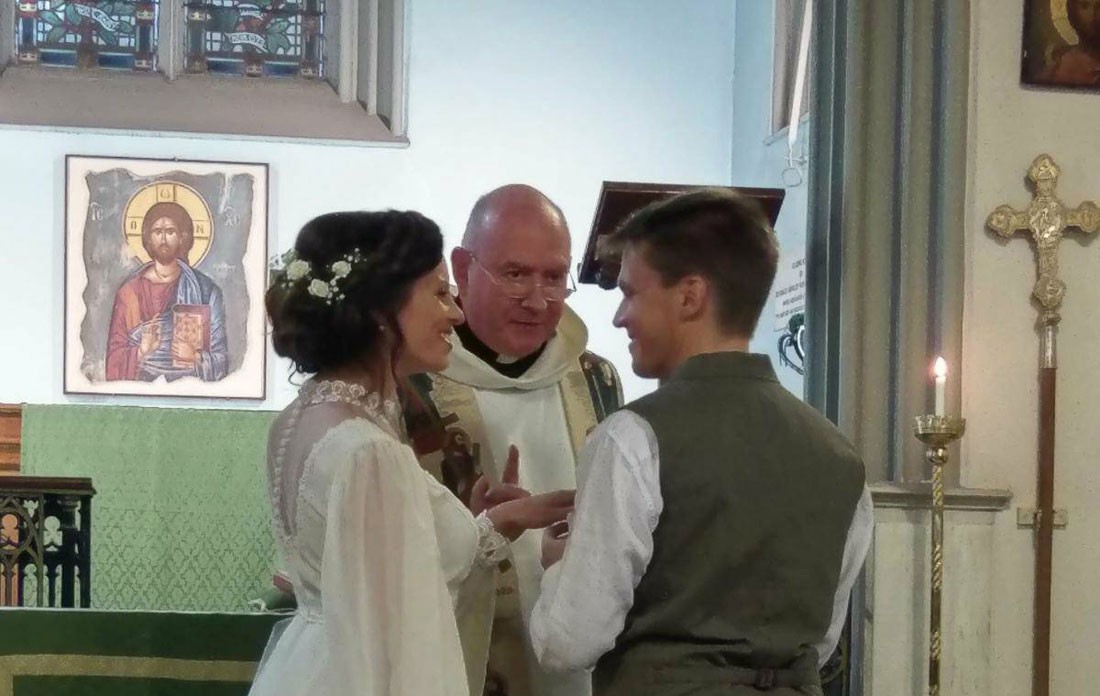 Natalia and Christian Reihe celebrate with a blessing of their marriage in St. Paul’s church, Athens. In the short homily, picking up phrase from a poem called ‘Someone’ Fr. Leonard developed the idea that love is about the heart in communion with the heart, and that this is how we connect to the heart of God’s love for us. END_OF_DOCUMENT_TOKEN_TO_BE_REPLACED

Today the Church of England remembers the Battle of Britain. Between  1940 and 1941 the Royal Air Force fought the Luftwaffe against very heavy odds in a period commonly called ‘the blitz’. London, Portsmouth, Bath, Coventry, the Clyde in Glasgow – all these and more suffered from the bombing campaign of Germany. In September  of that same year RAF Bomber command began a series of night raids over Germany that marked a turning point in the war with Germany as the RAF disrupted German plans to invade Britain in what was known as Operation Sea Lion.

END_OF_DOCUMENT_TOKEN_TO_BE_REPLACED

On Sunday 20th August, Baby Zoe Athena Constantidis was welcomed into our congregation as she was baptised at St Paul’s. We send her and her family our congratulations and ask everyone to keep them in your prayers.

END_OF_DOCUMENT_TOKEN_TO_BE_REPLACED

There are times when other people drag you down. Lynne and I are generally quite cheerful and positive people. In our various parishes over the years we have encountered some very gloomy people indeed. These are people for whom it is always December, but never Christmas; always Lent but never Easter. When we encounter such people it is such a temptation to enter into their gloominess and share the negative views that they are spouting out. In my last parish we decided that whenever anyone said anything negative we would counter it with the exact opposite – even if we are feeling the same as them, or sharing their views. It made quite a difference, in fact, and some people either gave up expressing anything to us, or genuinely started to be a bit more positive.

END_OF_DOCUMENT_TOKEN_TO_BE_REPLACED

It is funny how zoological my preaching seems to be at the moment. Some of you might remember a sermon I preached here a couple of years ago about how to eat an elephant – ‘in small pieces’. Then over the last few weeks we connected the little guinea pig type animal called a hyrax  to its nearest relative, which is an elephant;  then last week we had the irritated pig. Today we are keeping up the theme.

END_OF_DOCUMENT_TOKEN_TO_BE_REPLACED

I had dinner the other evening with a couple I haven’t met before. They are Athenians but now live in America. They are here on a family holiday. The reason we met up is because we have a mutual friend who works alongside them in New York. So as we were chatting away Kosta came up with a phrase I hadn’t heard before and I immediately liked it. Here it is:

‘It is very difficult to teach a pig to dance, and what’s more it irritates the pig’.